The center of Lourdes was just a short walk away, so I left my bike near my tent. The first church I spotted was the Sacré Cœur, that had been built about a century ago. The original church had been to small for all religious guests. But this church is not part of the Sanctuary. That is hidden from the center by the fortress of Lourdes. 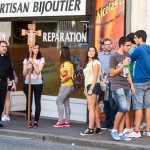 In the (ugly) tourist office I got a map with all important locations. I went into the direction of the Sanctuary leaving the fortress left of me. The way was stuffed with religious tourist shops, that offered plastic Maria’s to be filled with water from the cave. 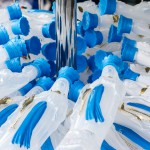 After the Pont St Michel, at the beginning of the Sanctuary there was a sign: no ice cream, no use of cell phones etc. And no commercial activities apart from selling candles. There are for layers of churches here. The Basilique Souteraine, a huge under-earth concrete building is the first and then three churches within the Basilique.
After seeing the Basilique churches, I first walked the Chemin the Croix, with large bronze 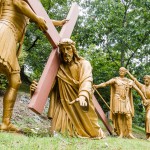 coloured statues building the scene for each stage. After passing a closed cave at the end I went down to the river bank near the Basilique. 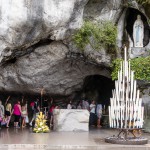 People were queueing for La Grotte, or precisely Grotte de Massabielle. The candleman was cleaning up rests of wax under the Mary statue. And the rocks in the Grotte were smooth, due to the thousands of hands that touched them. Just before La Grotte, one can tap water from the source, it tasted well. 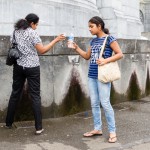 After La Grotte people were waiting to be bathed in the source water:one entrance for men, one for women, one for ill people and one for children.
This part could have been described by Thomas Mann (Zauberberg): disabled and ill persons were transported in historic wheeled equipment, about one century old. maybe that belongs to Lourdes, but I would expect some more 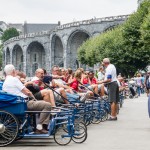 current material today.
After the bathes there was a candle burning site. Huge candles put in iron chambers were producing smoke, heat here. On many of them stocked a paper, mentioning the reason, why the candle had been lit.
I returned to the center to have my lunch near les halles. 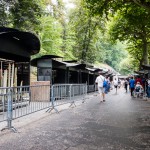 Then I looked at some locations from poor Bernadette`s life. The mill, she lived in is still there, but no water to drive the mill and hidden under newer buildings.
Another negative point of Lourdes is the traffic in the historic kernel. It is so small, that they could assign this area to pedestrians only. 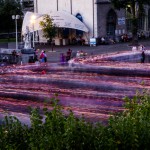 Every evening at 9 pm the candle lighted procession with Mary starts. I think, about a thousand persons were there.  It was rather impressive to see.

The night at the Col was rather cool an in the morning clouds were hanging low. On able to keep warm on the bike I took my raincoat and wore gloves. I did not cycle faster then 50 km/h, to prevent my bicycle becoming unstable and hard to steer. The pass road was quiet, just some cyclists on light racing bikes. The route was along small villages and green meadows with goats or cows. 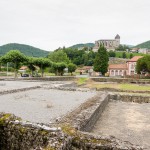 In the Garonne valley I had to decide for the high passes or the lower route in the northern Pyrenees. Because it was still very cloudy and I did not like the risk, cycling through cold rain or having no views at all, I opted for the northern route (as planned by Komoot). This does not mean, that this is a horizontal road, in contrary I had to cross a lot of valleys with steep roads. At least I could see more than clouds and in the afternoon the sun started shining here. 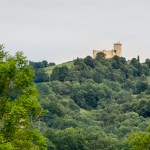 Near Bagnère de Bigorre some roads with higher traffic were unavoidable, but there were no problems. The last kilometers for Lourdes, the road was straight and smooth.
I went to a camping near to the railway station, so I can walk to the center of Lourdes tomorrow easily.
Distance: 100 km.

Last night there were heavy rain showers and they did not really stop in the morning. I had to pack a wet tent. The old railway track, I followed up to Mirepoix was barely visible after the town, but I tried to stay in the neighborhood and used little roads as far as possible. In Pamiers I followed the river until I arrived at the next old railway, now in use as a Voie Verte. I cycled  over the Viaduc de Vernaioul. That bridge has a lot of high arches. 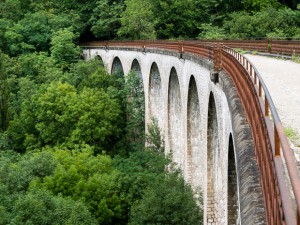 This cycle path was in a much better condition as the previous one. There are also three tunnels on this part. The Voie Verte ends just before Saint Girons. In the town itself there are no indications, where the cycle path continues,  so I decided to use the Komoot variant to Moulis. That meant a nice climb at the end of the day. On 1070 m I found a nice camping at the col.
Distance today: 117 km