Our cycle tour started in the Netherlands. We booked the ferry from Rotterdam Europoort 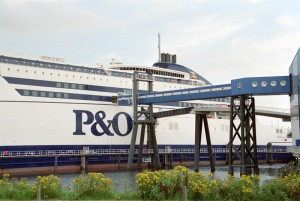 to Hull in advance via internet. It is recommended to do so, to be sure to travel on the desired date.

The ferry arrived in the early morning. We started on the route 65 (Trans Pennine trail) of the british National Cycle Network. The cycle route uses the busy Hedon Road to the west. Turn left after 400 m (Marfleet avenue continued as Marfleed lane). We knew there is an aldi shop on the crossing Preston road (turn right), but it was closed in the early hours. Some other supermarket on the Preston rd. was open, and we bought fresh food there. We picked up route 65 again (a dismantled railway) and cycled through the city. The last miles in Hull were the beginning of the first minor climb to cross some hills, leading to a nice view 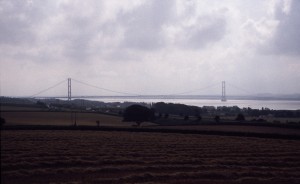 over the river. The views became worse near the highway, that accompagnies the route 65 about five km an must be crossed several times. The crossing in Brantingham was controlled by traffic lights. If you follow the signs for cyclists, you have to wait one cyclus on the isle in the middle, because the second traffic light is red again before the first one shows green. We advise to use the traffic lights for the cars here until the situation is improoved. After the village Ellerker the cycle route turned away from the main road and the environment became more interesting again. 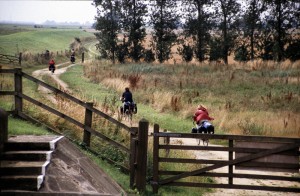 The cycle path was now near the dyke of the river Humber. Sometimes we had to open and close gates, that kept cattle in the meadows. For two years we saw the town Howden on another cycle tour, so we could follow the signs of the national cycle network, that avoided the interesting parts of the village. Near a pumping station for drinking water we found a tap for the same and we refilled our bottles. Just before Selby the route was in a worse state, and we wondered if we would have found the cycle path, if we had used it in the opposite direction. In Selby one should pay attention, not to fail the city and the cathedral, 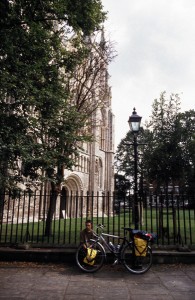 because the route 62 (the number had changed just before, after a junction with the cycle route from York) just ignores both. We left Selby via a very short canal tow path and a large old airfield. As it was time to find some place to pitch our tent, we just asked a farmer. He told us, the next pub had a camping site and so we found just in time a nice spot near the dyke of the river Aire. In the evening we enjoyed a pint of somewhat in the Sloop.

In the morning we discovered, there were no facilities accessible, when the pub is closed, but at least a water tap was outside. We continued our tour after breakfast. The next villages were Snaith, Gowdal, Pollington on small roads and a larger A-road. One kilometre behind Sykehouse we reached the canal to Doncaster and cycled on a tow path again until Braithwaite.Than on minor roads, crossing several railways, we got to a dismantled streight to Bentley. The usage of the cycle paths in Bentley was not easy for packed bikes. There were a lot of narrow gates, that should prevent motorcycles to use the bicycle path, but also hindered us heavily. We lunched near the river Dearne 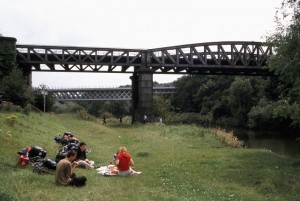 under the bridge of the disused railway, we cycled on before.

From here, the cycle path followed the river until Adwick. Near Adwick was a newly constructed bridge for the cycle path. After that bridge the the cycle path disappeared in a freshly ploughed field. We cycled back and tried to find an indication which way the national cycle path was lead, but we did not succeed. So, we decided to find our own route on minor or B-roads from now on. Wath, Elsecar, Hoyland were the next towns. In Howbrook we discovered, that its not always easy to find the right direction, if one uses a map of 1:200,000 and without signs on road crossings. We had to read the schedule of the bus stop to find our actual location. We just needed our brakes to get to Deepcar, but learned to use the pedals to come to Bolsterstone. Because the evening is coming and some of us are tired, I asked in the pub for a camping site and got the hint, a friendly farmer had some tents last year in his meadows. It was no problem for a night, if we didn’t fear for cows. The cows happened to be in a next meadow, save behind a solid stone wall. 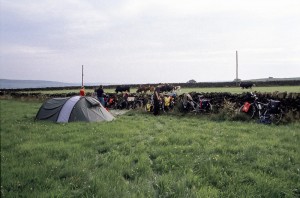 Cycling in the High Peak District takes some effort. Some roads are very steep, so it takes some time to cycle a loaded bike uphill